Anitha lost her husband who was working for SEDER Group, Riyadh in a fatal accident while he was on duty in 2014, at the age of 34. Anitha and her two young children had no other source of income for survival.
With constant follow up with the company for compensation and insurance, they received only a meager amount of 3 months salary and some contributions collected from the co-workers amounting to less than 3 lakhs rupees in total.
This matter was brought to our notice when they had lost all their hopes.

Upon receiving her grievance we got in touch with one of the officials from the company who was originally from Palakkad, Kerala.
Although he kept saying he had taken the matter as far as it could go, we still requested him to look into the insurance claim that we believed the family is entitled to. He said he will see if something can be done however he stopped replying to the messages and soon went silent.
When we informed him that we will not leave any stone un-turned to see if justice is given to Anitha, he got agitated. There after Anitha got a letter from the embassy stating that since the driver who was responsible for the accident also died in the same accident, the death compensation is not permissible, which was again a set back for our initial attempt for justice.
The matter was entrusted to us officially by Anitha to represent her in all forums and offices till her grievances were heard and justice was granted.
The matter was updated to the MEA office through MADAD and within few days we got the same reply quoting the previous letter issued though the embassy describing why the claim was not admissible. We spoke to the MEA office and updated them regarding the insurance claim not received by the family. As per their instruction, a fresh grievance was filed at MADAD quoting the details. The matter is still pending with no result. Click here for MADAD Status.

With some of the previous experiences in handling human right violations in Saudi Arabia, we knew it is an uphill battle and there is none to hear the grievance, we went into a detail study of SEDER Group to see how we can reach out to the top management, we then realised that they are in Joint Venture with few reputed companies in Ireland, UK and UAE where human rights have more values.
We wrote to them seeking their support for justice to Anitha. Within 7 days of sending this letter to them Anitha received an official letter from the insurance company saying that she is entitled for the death insurance and the required documents are to be submitted.
She has finally received an insurance claim of US$17920 which is equal to  ₹1164889 (Eleven lakh sixty four thousand eight hundred and eight nine only) from the Insureance company. 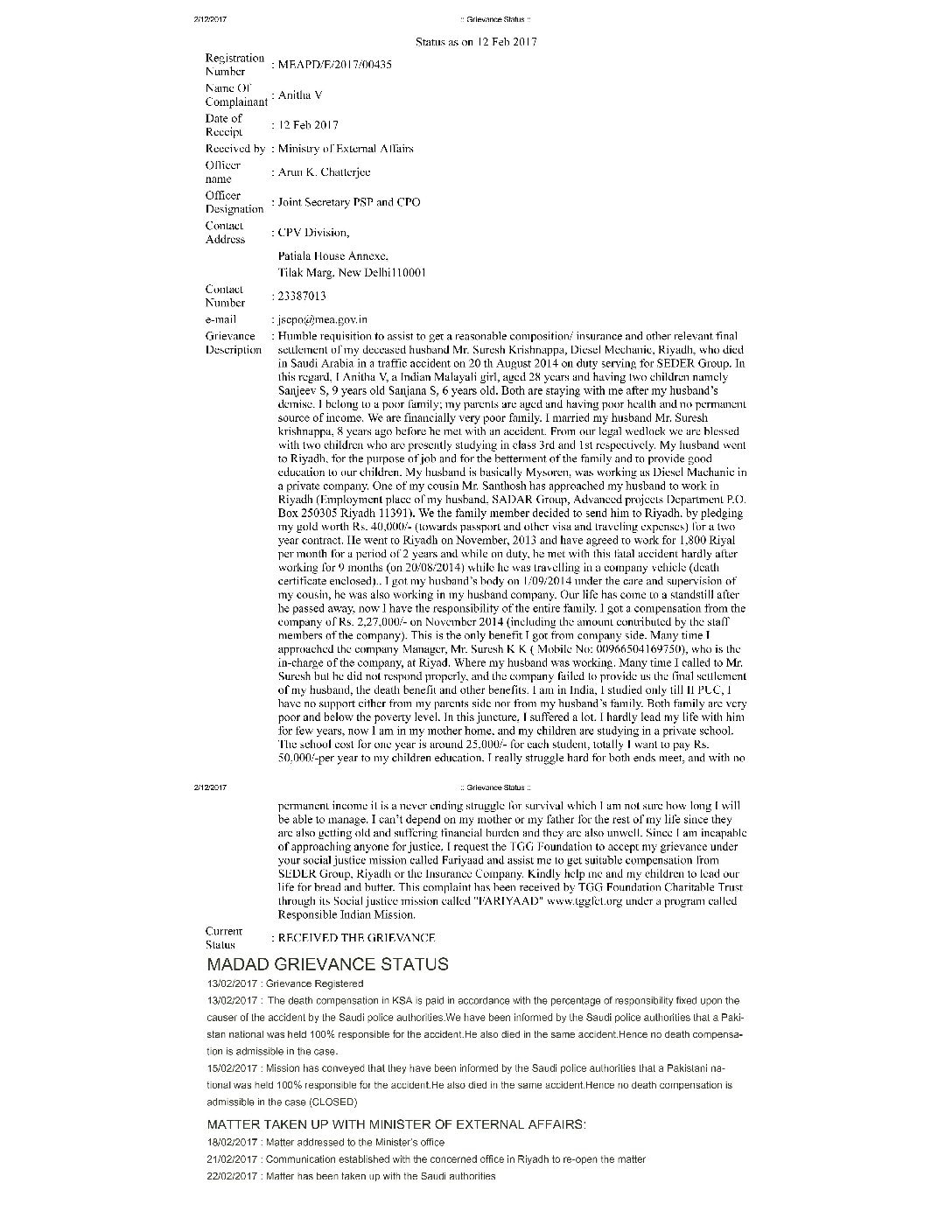